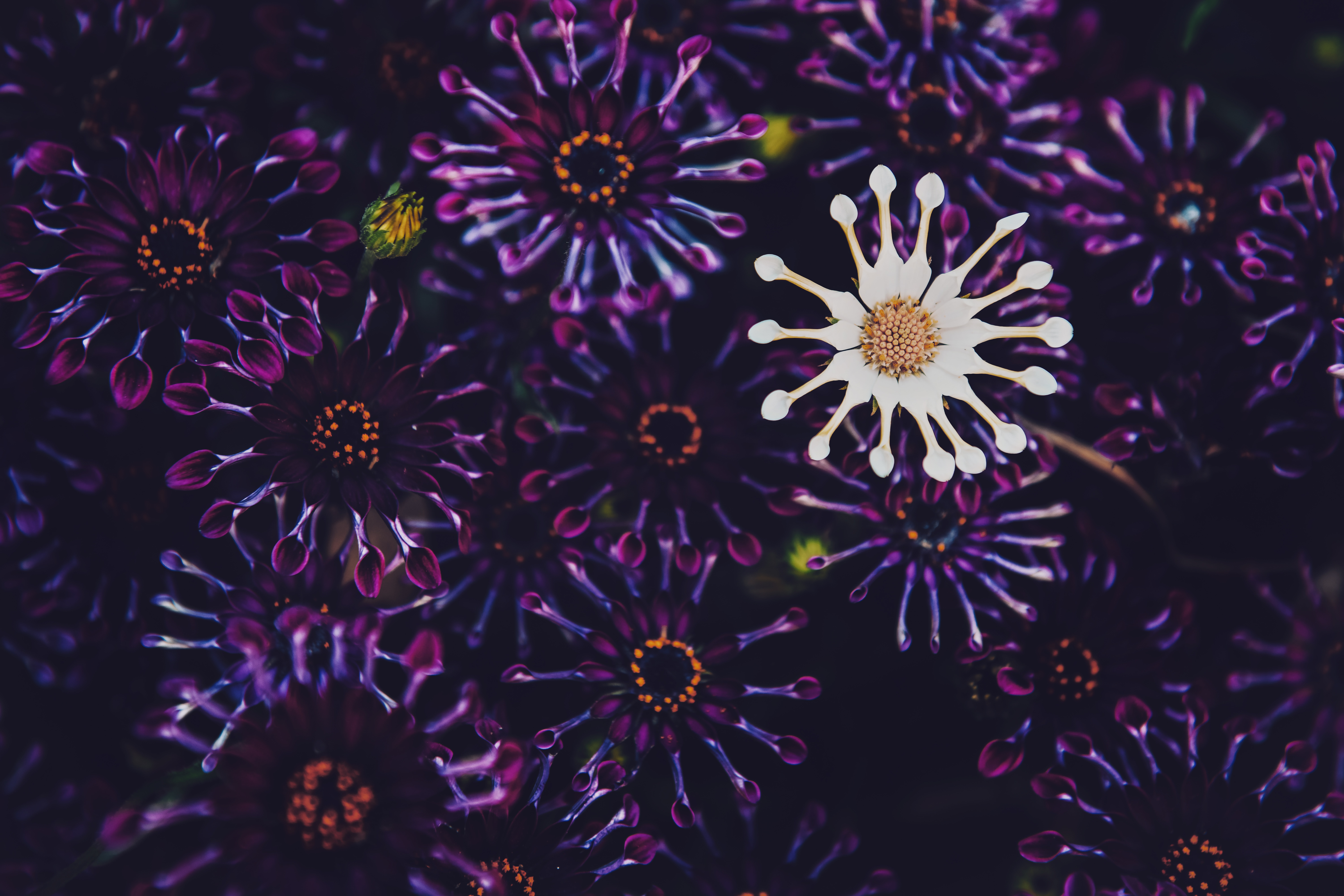 Fairy duster is a small evergreen shrub that can be found in hot and arid desert gardens. It features unusual furry blooms in shades of white, cream, or pink; and feathery foliage. Its height can vary from 1 to 5ft.

False rue anemone features white flowers with 5 petal-like sepals that grow individually or in groups of 2-3. Its leaves can be either basal or alternate and grow in 1-in tall branches.

Fan flower is a delicate flowering plant that features flowers in fanlike patterns with a wonderfully exotic look. While the petal flowers are in blue, pink, white and purple; its thoats are in vibrant yellow and white.

Fern leaf yarrow is more known for its anti-inflammatory properties as a herbal medicine than its beauty. It features clustered flowers that can measure up to 4″ across.

The feverfew is a species of chrysanthemum that features small, white flowers with vibrant yellow centers. It is grown in herb and medicinal gardens for its medical benefits or in regular gardens for its decorative qualities.

Fire pink features vibrant red tubular flowers that bloom in loose clusters at tops of 1-2ft reclining stems. The flowers consist of five sharp-pointed petals that flare out from the bases.

Firecracker flower can be found as a bedding plant in tropical and subtropical areas thanks to its narrow, oblong leaves and showy flowers that come in various colors depending on its breeder, including Mona Wallhead (Salmon pink flowers), Lutea (Rich golden flowers), Orange Marmalade (Bright orange flowers.)

Fivespot is known for their beautiful, striking flowers that bloom consistently all spring long. It is named after the way its flowers are structured: five pastel blue or white petals that are tipped with a deep purple spot.

Flame nettle is a delightful Australian native flowering plant that is mostly used as an ornamental houseplant or outdoor summer bedding scheme. It is prized for its impressive, bright and showy foliage.

Flannel flowers are prized for their soft white velvety flowers and silvery foliage. They can be found in between rocks or in a cottage garden where they are used to soften edges.

Flax flower is a perennial featuring abundant flowers that bloom from May through September. It is grown to its seed oil or as food for livestock.

Floss flower is prized for its whimsical pom-pom-shaped flowers that come in shades of blue, white, pink, lavender and red. With sizes ranging from a few inches high to three feet tall, floss flowers can be found in either containers or along pathways as well as massed in displays.

Forget me not features charming blue blooms with five petals and yellow centers. Due to its growing habit, it is usually found near brooks and streams or other bodies of water.

Forsythias is a low maintenance and fast growing, flowering shrub that belongs to the olive family. It is prized for its long branches with vibrant yellow blooms in the spring.

Four o’clock plant is a bushy tuberous-rooted flowering perennial featuring oval leaves on branching stems. It is named four o’clock because of their blooming habit: the flowers bloom around 4pm and remain open until the next morning. Its flowers feature trumpet shaped petals in shades of pink and red.

Foxglove features clusters of tubular shaped blooms in shades of white, lavender, yellow, pink, red, and purple. Its stems can reach up to 6ft in the right condition.

Frangipani is praised for its beautiful flowers that come in shades of pink, yellow, white, red. Flowers of the frangipani tree have an exotic and tropical fragrance, and are usually used in perfumes, lotions and candles.

Freesia features trumpet-shaped flowers that bloom on just one side of their arching stems. It is very popular to florists thanks to its long vase life and jewel-toned shades of white, yellow, orange, scarlet, pink, royal blue, lavender, and various bicolors. It is also praised for its intoxicating scent.

French marigold is a flowering plant in the daisy family that originated from Mexico and Guatemala. It is prized for its beautiful 1-4 inches flowers in shades of white, yellow, orange, mahogany, maroon, and rust, standing out in between dark green leaves.

Fuschia is praised for its delicate flowers that come in a wide variety of colors. It can be found hanging beautifully in baskets, planters and pots thanks to its bushy and trailing effect.

Fumewort features mauve-pink, purple, or white tubular flowers that stand out from grayish-green foliage. It is a great option to add interest to any shady garden nooks.