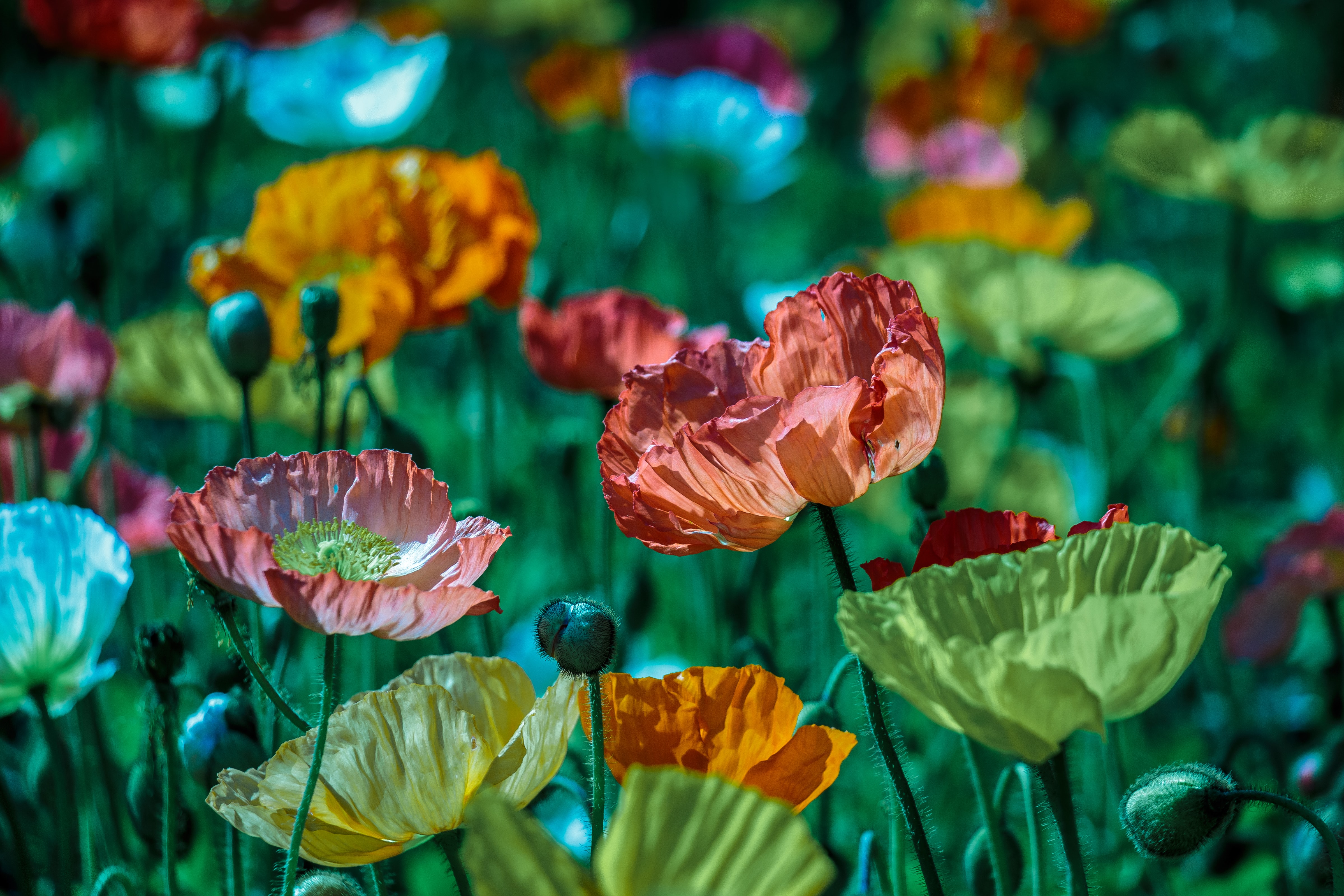 Buddleja is also known as summer lilac, butterfly-bush, or orange eye. It is native to Asia and is widely used as an ornamental plant.

Baby’s Breath is a genus of flowering plants in the carnation family, native to Eurasia, Africa, Australia, and the Pacific Islands.Their ability to flourish in a difficult environment makes them a great representation for everlasting love.

Spiny bear’s breeches is a flowering perennial clumping and native to Europe and the Mediterranean. It is often prized more for its leaves than for its blossoms.

Black-eyed Susan is also known as Rudbeckia hirta. It originates from North America and is one of the most popular wildflowers grown.

Penstemon canescens is a part of a large genus of roughly 250 species of flowering plants.The plant blooms into dozens of beautiful tubular flowers arranged on a tall stalk.

Acanthus mollis, commonly known as bear’s breeches, sea dock, bear’s foot plant, sea holly or oyster plant,  is a leafy, clump-forming perennial herb originating from the Mediterranean region. Being a species of plant in the family Acanthaceae, it comes with a rosette of relatively large leaves, together with purplish and white flowers on an erect spike.

Bergenia or Pigsqueak is a genus of flowering plants in the family Saxifragaceae. It is also called pigsqueak because of the particular sound created by rubbing their two leaves together. It originates from central Asia, Afghanistan, China and the Himalayan region.

Lamprocapnos spectabilis, bleeding heart, fallopian buds or Asian bleeding-heart blooms in the spring and finishes its growing cycle when warm weather sets in. At the end of its growing cycle, the flowers fade and the leaves die back.

Bouvardia is a genus of flowering plants, which originate from Mexico and Central America. Each Bouvardia features a crown of little flowers, and is often used to bring color into bouquet designs.

Gaillardia is a heat loving flower in the sunflower family that attracts butterflies. It features richly colored, daisy-like flowers and is an easy-to-grow.

Blazing star is an North American herbaceous perennial flowering plant in the sunflower and daisy family. Its gorgeous purple flowers bring about plenty of ornamental allure.

Bellflowers or Campanula is famous for its happy nodding heads which come in many sizes and varieties. With their signature bell-shaped blossoms, they are perfect for cut flowers.

Laurus nobilis is an aromatic evergreen tree or large shrub in the flowering plant family Lauraceae, known for their green and glabrous smooth leaves.

Penstemon or the beard tongues is native mostly to the Nearctic and North American. It features dozens of tubular flowers arranged on a tall stalk.

Blue-eyed grass or Sisyrinchium is a large genus of annual to perennial flowering plant, native to the New World. Even if it goes under the name ‘grass’, it is not true grasses and comes in a variety with flower colors other than blue.

Platycodon grandiflorus is a species of herbaceous flowering perennial plant native to East Asia. Being easy to grow, it is widely popular among gardeners. It features long-lasting star-shaped flowers emerging from balloon-like buds in summer.

Aurinia saxatilis is an ornamental plant native to Asia and Europe, which can easily be found in the least likely of places, such as paving stones, rocky outcroppings, the edges of gravel paths, or between the stacked stones.

Although bearded penstemon is a temperate flexible plant and thrives in most areas, it can mostly be found in mountainous areas. This plant produces dozens of tubular flowers arranged on a tall stalk, perfect for many arrangements.

Bee Balm Flower, also known by its botanical name of Monarda, is a genus of flowering plants in the mint family, Lamiaceae. It features an open, daisy-like shape, with tubular petals flowers in shades of red, pink, purple, and white.

Begonia is a genus of perennial flowering plants and is grown for both its foliage and or attractive flowers. It is mostly used as bedding plants and in window boxes, hanging baskets, and other containers.

Balloon flower is a clump-forming perennial and very easy to grow. Even though being a member of the easy-to-grow bellflower family, its blooms do not resemble bells. Instead, it features puffy, balloon-like buds that swell up to produce the 2- to 3-inch star-shaped flowers.

Baby Blue Eyes is one of the best-known spring wildflowers in California, featuring white petals each with a large blue-violet spot at the base.

in rock gardens or cascaded over walls. It produces a profuse spring bloom of bright yellow flowers that will remain in the garden as an attractive ground cover after blooming.

Bush Morning Glory is known for its large, lavender, funnel-shaped flowers with darker throats. Their stems can lengthen and form a bushy clump of 1 1/2-3 ft. tall and form a large roundish plant bearing flowers.

Ball cactus, as suggested by its name, is a geometric globular cactus with wool that grows in clusters and glistens under a haze of pale yellow spines. It produces brilliant yellow flowers and grows to 7-15 cm tall.

This evergreen shrub features incredibly fragrant flowers and is very easy to take care of. It resembles a miniature Southern magnolia whose flowers smell like bananas.

Opuntia basilaris or Beavertail Cactus is found mostly in the Mojave and Colorado Deserts and northwest Mexico. Each of them are usually about 60 centimeter tall with hundreds of fleshy, flattened pads.

Blue star flower is known for its soft blue, star-shaped flowers. The blue shade of blue star flowers is one of the truest blue ever found in flower colors.

Buttercup, also known as crowfoot, is a genus of herbaceous flowering plants, mostly found in woods and fews of the northern temperate zone.

Balloon flowers have buds that puff up like balloons before blooming into bell-shaped flowers. It is native to the slopes and meadows in Northeast Asia and Siberia.