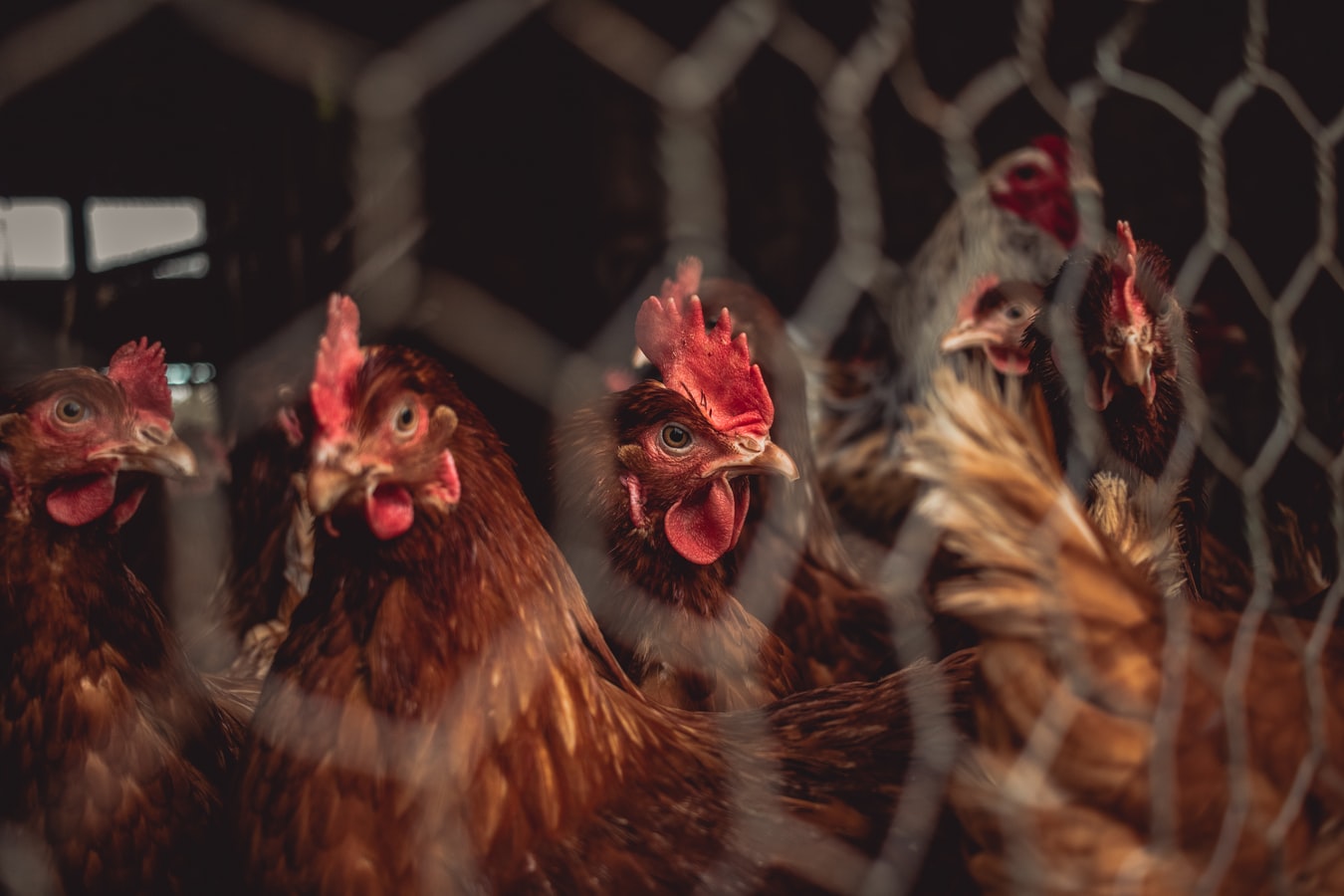 Our standards and practices are based on the Farm Animal Welfare Council “five freedoms”.

1. Freedom from hunger and thirst – by ready access to fresh water and a diet to maintain full health and vigour.

2. Freedom from discomfort – by providing an appropriate environment including shelter and a comfortable resting  area.

3. Freedom from pain, injury or disease – by prevention or rapid diagnosis and treatment.

4. Freedom to express normal behaviour – by providing sufficient space, proper facilities and company of the animal’s own kind.

5. Freedom from fear and distress – by ensuring condition and treatment which avoid mental suffering.

Natural behaviours for laying hens requires the ability to roam widely in search of insects, dust bathe, wing flap and socialise with other hens. Because our hens are not mutilated in any way they are able to follow their natural instincts.

The free range system incorporates natural poultry keeping methods. It is land based to ensure that the hens are happy, healthy and free and limited stocking density per acre is to provide both land and environmental sustainability. FRFA members exceed the standards of the Model Code of Practice for the Welfare of Animals – Domestic Poultry.

Overstocking is the biggest problem

Probably more than 90% of the eggs sold in Australa as ‘free range‘ do not meet the standards expected by consumers. Research has shown that buyers believe the hens are not de-beaked or beak trimmed and the hens roam on pasture all day. But unfortunately that is not the reality on most egg farms. Nearly all chicks are beak trimmed at hatcheries and many farms have stocking densities well above the limit of 1500 hens per hectare set by the Model Code of Practice for the Welfare of Animals – Domestic Poultry. The Egg Corporation admits that a third of eggs labelled as free range are from intensive farms, some with 40,000 and even up to 100,000 hens per hectare.

FRFA member farms have a stocking density limit of 750 hens per hectare, half the maxium set by theModel Code.

Hot blade beak trimming is still used in Australia on many chicks to control feather pecking and cannibalism caused by overcrowding.

This is how chicks are beaked-trimmed in modern hatcheries. The day-old birds are placed in a carousel and the tips of the beaks are automatically removed.

The process is probably more humane that the hot blade system pictured above which is still used in Australia – but it is a completely unnecessary process for birds which are supposed to be ‘free range’.

Many of the chickens bred for the egg industry have aggressive tendancies, because the only attributes which matter to industrial-scale egg producers is the number of eggs each birds lays and the minimal consumption of feed. Other breeds are available which are far less aggressive – but which probably don’t lay quite as many eggs.

The Model Code of Practice for the Wefare of Animals – Domestic Poultry specifies that beak trimming should be a last resort and that careful bird selection and animal husbandry methods should be implemented to control cannibalism. But the Australian Egg Corporation allows beak trimming as a standard option for farms which it accredits as ‘free range’  even when those farms have tried no other methods to combat the problem.
The fundamental issue is the question of stocking density. The AECL acknowledges that some ‘free range’ farms run 40,000 chickens per hectare, even though the Model Code suggests an upper limit of 1500 birds. At densities of 40,000 or even 10,000 birds per hectare, de-beaking or beak trimming would almost certainly be required because the hens are simply overcrowded and resort to pecking each other – it’s the same reason that hens in cages are debeaked.

How can a beak trimmed bird eat properly?

The diagram on the left demonstrates the difficulty a chicken has in eating when part of her beak has been removed. (a and b depict a beak trimmed bird and c and d show a bird with a full beak).  The beak trimmed bird can only eat feed from a trough and cannot graze properly as can birds with full beaks.

The industry doesn’t like the term ‘de-beaked’ preferring the more cuddly sound of ‘beak trimmed’, as if its like trimming your hair or clipping your fingernails.

The Australian Egg Corporation has claimed that no birds in Australia are de-beaked and that hot blades are no longer used. It says that all birds are now ‘trimmed’ with infra red equipment.  The AECL can produce no evidence to back up that claim and it is widely known (even by the Egg Corporation) that hot blades are still used in Australia and there is ample evidence of severe beak trimming.

A hen which has been beak trimmed can generally only eat the food provided for her in a trough or automatic feeder, so the nutrients in the eggs are exactly the same as in eggs laid by hens in cages.

There is a belief in the industry that an increase in injurious pecking followed the ban on the use of animal products such as meat meal in poultry feeds following the BSE crisis. The rearing companies recommended the use of beak trimming to ameliorate the problem and levels of beak trimming in alternative production rose to around 45% by the end of the millennium.

How beak trimming was (largely) phased out

Beak trimming was banned by the certification bodies but the ban was not executed. The rapid rise of beak trimming caused great concern to the animal welfare groups who owned the certification body KAN and wanted the ban enforced.
At the same time, the producers were deeply concerned to prevent cannibalism which was not only a cause of economic loss but was traumatic for both hens and stockpeople.

A mediation process  was established to resolve the impasse. The mediation process came up with the following agreement. Beak trimming was to be phased out, with an agreed timetable of reduction, but steps were to be put in place to deal with the problem of feather pecking and cannibalism and to give farmers and rearers the confidence to manage hens without beak trimming.

The farmers agreed that:

•Those who continued to beak trim in the first years after the agreement was signed would pay an additional certification fee which increased annually
•This created a fund which provided an insurance scheme which compensated any farmer who lost birds to cannibalism as a result of keeping birds with intact beaks.

A project was set up and funded by the Austrian Ministry of  Agriculture, Forestry, Environment and Water Management  which established guidelines for farmers and conducted a literature search to collect all information available concerning feather pecking and its causes the agreement phasing beak-trimming out was signed in June2000. He adds that since 2005, there has been very little beak trimming in alternative husbandry in Austria. It dropped from a peak of just over 45% in 2001 to under 5% by 2005. It is currently just over 1%. The process of phasing beak trimming out took four and a half years from the signing of the agreement.

Levels of beak trimming started to drop after 2001 as the agreement took effect. This was followed by a small increase in both feather pecking and the more serious injurious  pecking.

However, as the project to address these problems advanced, levels of both dropped at the same time as beak trimming continued to be phased out.

Injurious pecking and feather pecking are multi-factorial in their origin.

An integrated approach is required including:
• Suitable breeds
• Appropriate stocking densities in both rearing and laying houses
• Provision of raised perches
• Rearing systems with a similar layout to laying houses
• High protein diets, especially in the early stages of lay
• Control of weight gain, especially in rear
• A proper health plan including vaccination
• Good climate management, especially levels of pollutants such as ammonia
• Development of good human-animal relationships
• High levels of stockmanship and management including record keeping.

It is important that hens are bred for docility and against the tendencies towards feather pecking and cannibalism. In Austria, the breed Lohmann’s Brown dominates the market, both in intensive and in alternative systems. A minority of alternative systems use the Lohmann’s Tradition breed. Other breeds are rarely used in Austria, despite the attempts of their salesmen.

Although there is no data on this, anecdotally, farmers who had tried other breeds experienced greater levels of problem with injurious pecking.

High protein diets and phased feeding are key to the success of the Austrian system. These contain up to 19% protein for the first most productive stage of lay (the protein will come from vegetable sources such as soya, supplemented by synthetic amino-acids such as lysine and methionine as necessary), dropping to 18.5% till week 50 and perhaps later to 18% or 17.5% to avoid excessive egg size. These percentages are higher than nutritionists would advise, but when they have tried lower levels they have had problems with injurious pecking. Weight gain in rearing flocks is also crucial – rearing flocks with lower body weight or large spread will always be problematic.

Nobody is suggesting that Austrian systems are free of feather pecking, but that levels of the more serious injurious pecking including cannibalism have been reduced at the same time as levels of beak trimming. In Austria, it is seldom for flocks to have levels of injurious pecking that increase mortality. Most importantly, the steps required to manage flocks without beak-trimming actually managed to reduce feather pecking and cannibalism at the same time, creating a win-win situation which was also good for production.

The avoidance of feather pecking and injurious pecking in birds with intact beaks is a key measure of good welfare in laying hens. Provided that injurious pecking can be controlled, the phasing out of beak-trimming is good for both production and welfare.

The Free Range Farmers Association recommends that members ensure that their hens are vaccinated against a range of diseases which may affect the health and egg production of the birds. In Victoria, the Department of Primary Industries requires certain vaccinations (such as Mareks and Newcastle Disease) in commercial flocks – which are designated as more than 1000 hens.

Protecting pullets from diseases during rearing
Viral, bacterial or parasitic diseases can result in significant problems including increased mortality, suppression of the immune system, stunting, poor growth and damage to the reproductive tract. It is important that birds are well protected by an appropriate vaccine program, linked with good biosecurity, management and nutrition to ensure a healthy robust pullet at point of lay.

The rearing vaccination program helps to provide the pullet with long lasting immunity to protect her not only through the rearing period, but also into lay. This protection helps to maintain not only healthy birds but good egg quality, avoid egg spoilage and production. Respiratory viruses such as Infectious Bronchitis (IB) can reduce production or cause problems with shell quality.

Vaccination on the laying farm
The rearing vaccination program should provide very good immunity for your pullets and additional vaccinations may not be required on well managed farms running single age flocks. However on some farms – particularly on multi age sites or with high poultry density- additional “top up” vaccinations during lay may be required.

Flocks on multi age sites or with high poultry density may be more at risk of respiratory viral challenge  with IB. Viral infections can have a significant effect on the oviduct resulting in drops in egg production and/or shell quality problems. It may take several weeks for an affected flock to recover, which could severely impact on production volumes and shell quality.

If a vet identifies a problem in a laying flock with respiratory viral challenge, or examination of blood samples indicates low antibodies for these viruses, additional vaccinations may be needed.

What are free range eggs?